When I started The New York Bakers (www.nybakers.com) a little over 2½ years ago, my goal was to offer home bakers the broadest range of non-bleached, non-bromated professional flours I could find. 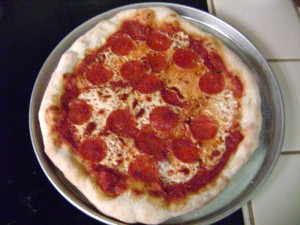 I didn’t know what I was in for: there are dozens of professional flours out there. Despite all that apparent clutter, most commercial flours are variations on four main classes– high-gluten (14% protein), bread (12½%), pastry (9½%) and cake flour (8%). I also discovered that the vast majority are produced by a handful of mega-millers – think General Mills, ConAgra (which also produces for marketers like King Arthur, Giusto’s and Capitol) – and an equally small number of mid-tier mills, like Bay State and Pendleton Flour Mills. And then there are the small mills, like Heartland and Central Milling, that produce premium flours for artisan bakers.

One category that I really wanted to carry was imported Italian Tipo 00 pizza flour – and, of course, the flour I wanted was Caputo, which everything I read described as the ultimate pizza flour, straight from Naples, the epicenter of the Vera Pizza Napoletana (VPN) universe. So out I went to locate a distributor.

I found one in LA (despite our name, we’re in San Diego) – actually a bit south of LA proper in Vernon, which is completely industrial: no one actually lives there. So I phoned them and talked to one of their sales folks, who said, “Yeah, no problem. We have the Caputo, so come on over and pick it up.”

So into my car for the 2-hour (optimistically) trek on the SoCal freeways up to Vernon. I have to admit, I was really excited. After all, everything I’d read told me that Caputo was the Holy Grail of pizza flours. So imagine my shock and disappointment when the warehouse guy comes back with several red, white and blue bags that said “Pivetti” where “Caputo” should have been.

“No worries,” said the sales guy when I went back to the office to talk to him. “They’re virtually indentical. Besides, we have lots of customers who love the Pivetti.”

What was I to do? I took the Pivetti, drove back down to San Diego and changed my product lineup to read “Pivetti.”

Then I did some research and learned that the Pivetti mill, which has been owned and operated by the same family for over 130 years, is in Modena, in northern Italy, well away from Bella Napoli, and a city best known for its balsamic vinegar, sausage-stuffed pig feet called zampone (not to be confused with the hockey ice machine), and native son Luciano Pavarotti. “Drat,” I thought to myself, “what do those northern Italians know about pizza?”

Of course, I hadn’t tried the stuff yet – in fact, I’d never used any authentic Tipo 00 flour – so I proceeded to do so. I used the classic formula for VPN, which was 58% water, 2% salt, 0.3% fresh yeast, no bulk fermentation and cold retardation of 12-18 hours.

Well, I was blown away. I had been using high-gluten flour, mainly GM All Trumps at 75% hydration and with 5% olive oil, for my pizza doughs, and constantly found myself struggling with tearing. The Pivetti was pure pleasure, even at that low hydration level. The gluten was well-developed, but the most extensible I’d ever worked with: when I stretched it, it stayed stretched, and I could get a 16-inch pizza out of 10oz/280g of dough. I could literally read a newspaper through that crust. So I was a happy camper.

But I couldn’t stop thinking about the Caputo. One of my customers in Arizona found a distributor there and started using the stuff. She told me that it was more elastic than the Pivetti, and held its shape better. I was tantalized, like the kid at a store window filled with imagined candy.

Finally, a couple of months ago, my supplier told me that he had the real-deal Caputo in stock and would I be interested. I think I broke the speed limit on my way back up to LA, loaded up the car with several bags of the Caputo, plus a couple of Pivettis, and tore back home so I could try out my newfound treasure.

It wasn’t what I expected. Where the Pivetti is white and fine, the Caputo was more yellow and has what felt like a slightly coarser grind. Where I expected the same degree of extensibility, I found instead greater elasticity, comparable to a mild bread flour like GM Harvest King (12% protein) or King Arthur Bread Flour (12.7%). The Caputo formed beautiful round crusts, with a well-defined edge, but the gluten was really evident.

Here’s how they compared in my test bake:

Raw flour: The Pivetti flour is a very pale yellow, nearly white, with a very fine grain. The Caputo has a somewhat coarser grain (although still fine, since 00 refers to the grain size and not protein/ash content), and a definite beige/ light brown color.

Mixing: The Caputo is definitely thirstier than the Pivetti. At 58% hydration, the Caputo formed a much stiffer dough — to the point where my KA Pro was laboring on the dough hook. Not so with the Pivetti, which produced a smooth, fairly slack dough.

Benching:  I rested both doughs for 20 minutes before dividing it into 280g  boules and put each into a lightly oiled plastic sandwich bag.  The dough then went into my wine cooler for 10 hours.  The Pivetti dough increased in size more than the Caputo and was slightly softer to the touch.

Throwing the pizza: Both doughs rested at room temp for 2 hours.  My technique was the same for both doughs: cutting the sandwich bag away so as not to disturb the dough, flouring both sides and using my fingertips to stretch the middle, then shaping the pizza by putting the rim over my knuckles and stretching it to about 16″ in diameter – thin enough to see light through the center.  I then put the dough onto a floured peel, dressed the pizza and baked at 550F for about 6 minutes.

Both doughs were quite extensible, the Pivetti moreso because its protein content is clearly lower than the Caputo, which almost felt rubbery and very firm. That said, both doughs threw very nicely, with a nod in the direction of the Caputo for ease of forming a more uniform circle.

The crust: The Caputo crust was denser, chewier and more flavorful than the Pivetti, which sprang nicely in the oven, leaving big air pockets in the rim.  Both crusts were thin and crisp, and biting off a piece of the Caputo pie took more effort than the Pivetti. At the same time, the Caputo didn’t seem to hold up under the weight of the toppings as well as the Pivetti, so there was more sag when we picked up the slices. That said, both crusts had distinctive personalities and were excellent in their own way,

Verdict: If you like a chewy crust, not unlike good American pizza (emphasis on good), the Caputo wins hands down. My family and I prefer a crisper, less chewy crust, and the unanimous winner in my house was Pivetti.

Fortunately, you can find both at www.nybakers.com