thought you might be interested in what i’ve been up to lately, so here are some recent pics.

The book is moving along.  The editing is done and I’m going over the corrected manuscript and getting some more photos together.  Our publisher has a designer working on the internal design, and I gather that the finished book is going to run somewhere around 320-360 pages.  We’re moving toward the prepublication home stretch and I can’t believe it’s actually happening.

Besides all that, some of you have probably noticed that we did a radical redesign of the nybakers.com website.  After over two years in business, we decided it was time for a more polished look … the idea being that we’re pretty sure we’ll be in business for a while.  thanks to everyone for your support and encouragement.

We had to re-shoot a bunch of the photos, including the rainbow slices and French cookies, and Norm was having some health issues (all resolved now), so it was up to me to do the baking. Unfortunately, I couldn’t find glace cherries, needed for the French cookies, in quantities less than 30#, so I went to a local bakery and asked if I could buy some. The woman at the counter went in the back and came back out, telling me there was no problem with that. The baker himself followed, with 1/2 a pound of the cherries and told me “no charge.”

I thanked him, introduced myself and told him what I was doing and we talked shop for a bit, then his wife came out. “Ooooh, rainbow slices, I love them. He made me a tray for my birthday!” Jerry, the baker, smiled. “A lot of work,” he said. So cherries in hand, I went home and baked.

After the cookies were finished and photographed, I took a plate over to the bakery and got huge smiles and thank you’s from both Jerry and his wife — talk about positive reinforcement: I floated on air for days! 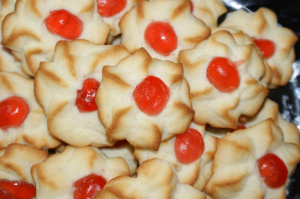 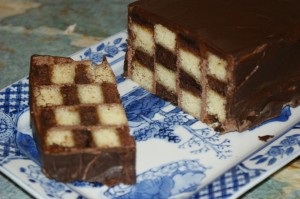 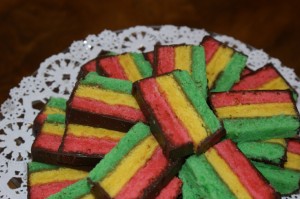