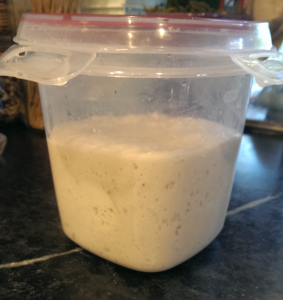 It never fails to amaze me how a lot of home bakers, especially newbies, turn their sourdough starters into objects of obsessive-compulsive desire. Recently, in fact, I was bemused to read a sourdough neophyte’s post in which he mentioned, with as dead a pan as Grant Wood ever painted, that he was feeding his established sour twice a day. Twice a day!!! And people wonder why their breads don’t get sour enough.

Or how about the endless debates on which flour is best for feeding a yeast culture – as if those cute little eternally hungry fungi care where their next meal is coming from, or whether it’s the carb equivalent of filet mignon or pâte de Dumpster.

And another thing: sours localize. After about the fifth or sixth feeding, that authentic SanFran culture – Saccharomyces sanfransiscensis, for all you yeast nerds out there – that you shelled out big bucks for has been completely replaced by your local wild yeast, which you could have gotten for nothing simply by building a starter from scratch (of which more in another post). 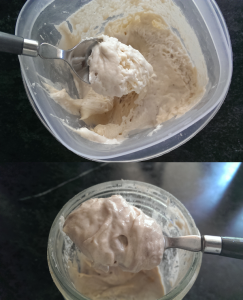 Wheat (top) and Rye (bottom) unfed for 5 weeks. Note the absence of hooch.

I’ve always been of the opinion, and the facts bear me out (as you shall soon see) that those splendid wild yeasts and their lactobacillius symbiotes can take far rougher treatment than a lot of us give them credit for and still remain robust and ready to leaven at a moment’s – well, several hours’, actually – notice. After all, the airborne yeasts and bacteria in which we respirants swim have to survive not only warm weather, when naturally occurring carbs abound, but also the carb-famine cold months. Their survival is a testament to evolution and the vitality of the meanest and sourest.

As a case in point, take my sours (please!), one rye and one wheat, which I haven’t coddled, overfed, or even given cute names, as have some hardcore breadies. To me, they’re simply fungal-bacterial-enzymal ménages à trois, teeming with ever-ravenous microbes, that have found a home in my fridge. I feed them when I (a) want to bake sourdough, (b) remember to do so, or (c) when my conscience gets the best of me. 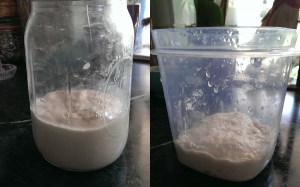 Rye (left) and Wheat (right) after feeding and ready for their nap.

Nor do I agonize over their next meal. While I confess that my love of Jewish rye compels me to feed my rye sour with white rye flour only, I give my wheat sour whatever I have on hand, whether it’s first clear flour, bread flour, AP, or even (gasp!!!) cake flour. In fact, cake flour makes a pretty good nutrient for established sours, since it’s so rich in complex carbs (read = starches), which all those enzymes – maltase, amylase, diastase – will happily break down into the simple sugars that their yeasty roommates crave. The yeasts, in turn, throw off CO2 and alcohol, on which the lacto get high and return to the mix as lactic and acetic acid. The one thing I do pay attention to, though, is hydration, which I scrupulously maintain at 60% for the wheat and 80% for the rye. 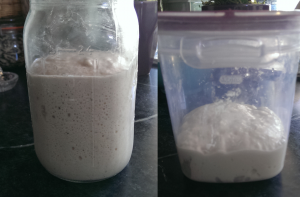 A balanced and robust sour needs time to develop – not a huge amount; maybe a couple or three days. So to me, overfeeding not only is wasteful, it’s actually counterproductive. Rather, I want to give my microbial pals the chance to work their magic and send it around the food chain so that all of us can eat well, live long and prosper.

Refrigerating slows the process down, giving us an enormous amount of control over our sours.  Those little yeasty beasties are busiest at 80°F to 100°F (27°C to 38°C), and go into near-idle mode at refrigerator temps of 38°F (3°C) or so. At those same temperatures, the lactobacilli also doze off, but remain active enough to produce small amounts of acid: the longer my starters sit in the fridge, the sourer they become. 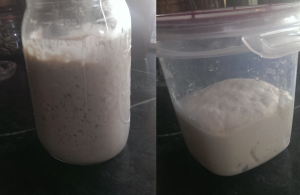 So there it is: call me a fungus abuser if you will, but I’ve found that those little guys do just fine as long as I keep their environment cool and moist and throw them a carbo-bone every once in a while. In the meantime, they sit patiently by in my fridge, waiting to play their critical role in my next batch of sourdough; and if I take more time between bakes than other bakers, they never complain. A nice feeding, given a day or two before I mix my dough, resuscitates them and keeps them happy as mushrooms on a rotting log.

My sours are loyal retainers who’ve never failed me: perhaps I should give them names after all – something endearing, like Popeye and Olive, or maybe just Wheat and Rye.